This was our many castles day! Travelling from Swansea to Cardiff we fitted in three completely different styles of castles. We also had a delightful and fascinating extra that we weren’t planning to look at and I’ve got to admit that was kind of my favourite bit, but we’ll get to that later.

First, we visited Castle Coch which is, to be fair, not really a castle. It was built as more of a summer retreat which is why it has pointy bits and a very small footprint. But it is pretty and there was a wedding taking place, which you can guess happens a lot.

Then we went on to Caerphilly, which had been the castle I was most hoping to see. It’s huge and you can walk around and through the whole thing, which now sits in a lovely town. We decided the inside didn’t offer too much of interest, but spent a loooong time walking around the outside. There were also a lot of waterbirds. Like, they were everywhere!

And if it looks like the tower on the left is leaning – well it is!

As you can tell, it was a bit of a cloudy day, and rain drove us into the shops in Caerphilly briefly. Where we bought crazy rave-worthy hair extensions and other glitzy things. We also had delicious lunch.

Then we headed onto Cardiff, but we were a bit ahead of schedule. Not normally an issue but we’d booked parking near our B&B and we didn’t know what would happen if we turned up early. So we needed to kill some time.

I dragged out my guidebook and found that there was a very, very old chambered tomb on the road ahead. Not only is it 6,000 yrs old, it has the coolest wind-up info thing that tells you all about it.

Not all of this is original, but the slab on the top is and it’s enormous. Tinkinswood Chambered Tomb.

Time killed (in a wonderful way!) we got to Cardiff and checked into the funkiest little B&B I think I’ve ever seen which was off one of the main shopping malls in an arcade. After enjoying ourselves for a bit and resting, we then walked the city.

It was bustling and much more multicultural than anywhere else we’d been. After I got us lost (had to happen at least once) we managed to see most of the government buildings and shopping areas and had some nice dinner. We didn’t go into Cardiff Castle, but we did walk around the outside and saw the “animal wall” where all different animals peek out over the top! 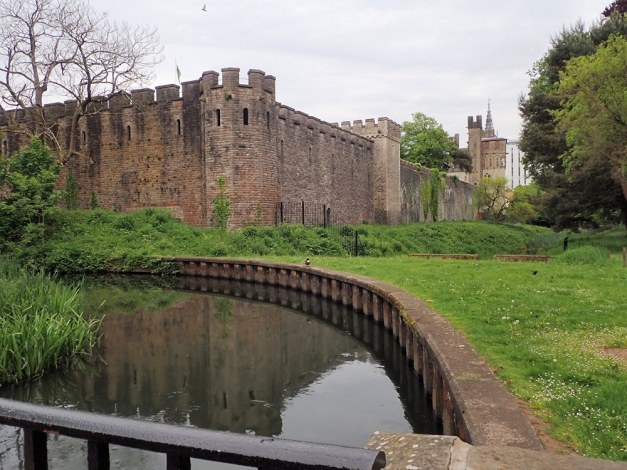 This is the back of the castle from the lovely park there.

We were only in Cardiff one night, but did manage to see a chunk of the place. It was cool to see such a big city considering we’d mostly been stopping in very small towns. There were the ubiquitous number of tourist shops and, well, a lot of Welsh flags.

The only sad thing for us, was we got a fine for being in a bus lane… somewhere in the city! Of course we only found out after we got home.

Of index cards and coloured pens…

It’s been at the back of my mind since I started my interlinked novellas that at some point I was going to have to stop and make sure the world was consistent across them. That time has come.

I could have done a spreadsheet. That’s worked in the past. But this time there were a lot of things to track and a lot of information to include for each thing in each novella. Now that kind of thing needs doing where you can see it all, in my opinion, and that means a wall!

A small supply trip gathered index cards and a packet of coloured pens and I set to re-reading the drafts and then filling out a bunch of cards. It was fun, actually. I have always had a thing for colour coding things and, strangely, index cards.

All of them are now in appropriate columns on a wall in my house where I can see them.

The funny thing is how obvious gaps become when you do this sort of activity. Blank index cards indicate things that don’t exist in a given novella. Cards with only a line of text indicate maybe there’s some description missing. Very useful.

Not, possibly, the most environmentally friendly way to tackle it, but I’m working on ways to reuse/recycle them before they got to the recycling bin.

In which the writing daemon takes a small holiday…

After the rather heavy output of recent months, my writing daemon decided to take a break. Without warning.

I don’t begrudge the break, but it might have been nice to know the blighter was about to do it so I could plan to fill my day with other things… still, it was more a surprise it had taken so long in coming!

He flitted off to wherever writing daemons go when not muse-ing and I sat around wondering how to spend all the extra free time. Then… he came back.

This may be the shortest break he’s ever taken.

Since his return we’ve been working on novella 3 of the series and it’s… well, it’s not exactly been flowing. This had made me think some more time off would be a good idea ,until found the source of our problem. The subplot is apparently turning into something mega.

Of course this happens from time-to-time and usually indicates that the subplot is in some way more interesting than the chosen main plot. I don’t think that’s so here… we will see.

To send off 2019 in good fashion, it’s entirely possible that I will be writing at midnight tonight as opposed to my usual themed movie marathon. Though, it’s also possible I’ll be asleep. Feels like one of those years where the decision won’t be made until much later in the day!

For all my writer-peeps out there – I hope 2020 is a productive year for you. For all my non-writer-peeps – I hope yours is satisfying in some relevant way. And, of course, a safe and happy one for all!!

Was I doing what I thought I was?

After completing the draft of Indestructible in November, I’ve been focussed on other things, but due to an offer from a friend to read it, I needed to tidy up my 1st draft a little. I re-acquainted myself with it, did a few edits and sent it off.

This project is noir, and it was always my intention to write the draft as it came and then “noir it up” in 2nd draft. After reading it through, though, I wondered if it was already noir enough. As my reader is a fan of noir, I guess he’ll tell me his view, but I realised I didn’t know what the definition of noir was!

Funny how you can know something when you see it, but not be able to describe it succinctly.

Apparently the definition is: a genre of crime fiction characterized by cynicism, fatalism, and moral ambiguity.  So, how does Indestructible fare with all of that? Crime – tick. Cynicism – tick. Fatalism – tick. Moral ambiguity – tick. I think it’s doing okay!

It’s all Greek to me

For a few weeks now, whenever I’ve taken a break from writing/editing, I’ve been playing around with figures of rhetoric. This is a) because I have a cool book on them and b) because I’m looking for ways to play with language in one of newer novels.

The thing is that I write plain, sparse prose. That’s my natural style for fiction and I think it generally suits the type of sci-fi I’ve been writing. Just occasionally though, I play with dialogue. Usually because it makes no sense to me that characters from different planets all speak the same way. Sometimes I keep it subtle – like a character who never uses contractions – and sometimes I go the full Yoda!

But I’ve used up most of the simple approaches over my existing short stories and novels. So, now, I’m looking for new patterns that work in English to try out, which leads back to rhetoric.

The Ancient Greeks spent a lot of time sitting around thinking about language. They broke it down into all sorts of patterns that have different strengths and weaknesses and put a name to each one. Thus the title of this post, because honestly the names of the figures of rhetoric are almost harder to wrap my head around than the definitions!

You can tell I didn’t have a ‘classical education’.

My favourite for thinking “Yep, because that was totally obvious” is the pronunciation of zeugma (zyoog-ma) and for thinking “Stop with the syllables” was definitely epanalepsis.

Aside from struggling to pronounce and remember the names, the thing I’ve realised about many figures of rhetoric is that they work really well for applications where language is heightened, like poetry a speech, or types of theatre. They are a bit trickier to deploy in naturalistic fiction.

We used Swansea as our base for a day trip down to the Gower Peninsula, the highlight of which was seeing Worm’s Head (worm = dragon). 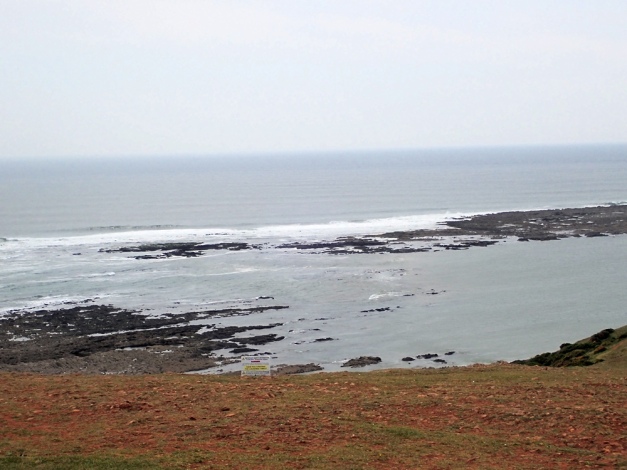 It’s hard to get the scale of this, but the water here is covering the massive causeway that joins the dragon to Wales. Obviously there are only certain times you can cross! 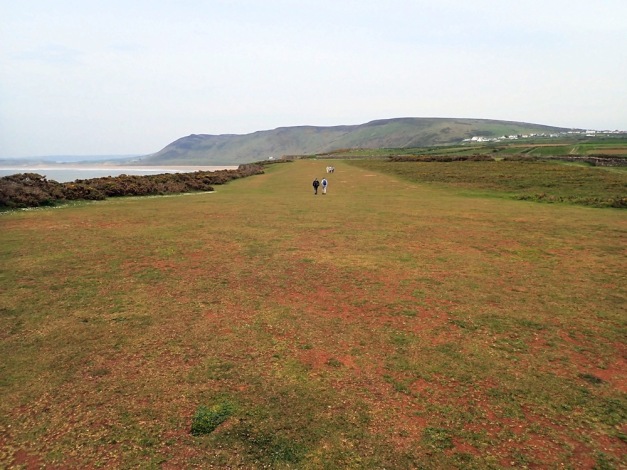 It was a great walk to Worm’s Head, but you get the feeling they maintain it for the number of tourists that visit.

I love how all Welsh sheep are spray painted.

After a day spent on winding roads and looking at the coast (and sheep, of course) we had a quiet dinner in Swansea. It got a bit exciting after that, because the hill opposite our hotel room caught fire! Coming from a fire prone country it was nerve-wracking to watch how close it got to houses…

I don’t have great photos of Swansea itself, but I did love the museum there. So much fun stuff to look at!

Posted by lamellae on December 10, 2019
Posted in: My Writing. Tagged: novellas. Leave a comment

You know how I’ve been having a big, productive year? Well, let me add to that list!

Yes, I have managed to complete a draft of the second novella (aka “N2”) of my three novella series. It’s only a little bub at 20K but I’ve been so excited to finally get it re-written and complete.

As it’s pretty close to the end of the year now (whoosh goes another one!) I doubt I’ll finish anything else off, but I am going to try to wrestle N3 into shape next. Mind you, the ol’daemon is flitting about excitedly looking for new novel ideas. He seems to think that we’re ready for another new project…

Lamellae
Create a free website or blog at WordPress.com.